> Culture, Travel > A fulfilling top 30 recommendations around Hiroshima – Specially for your soul and stomachs! 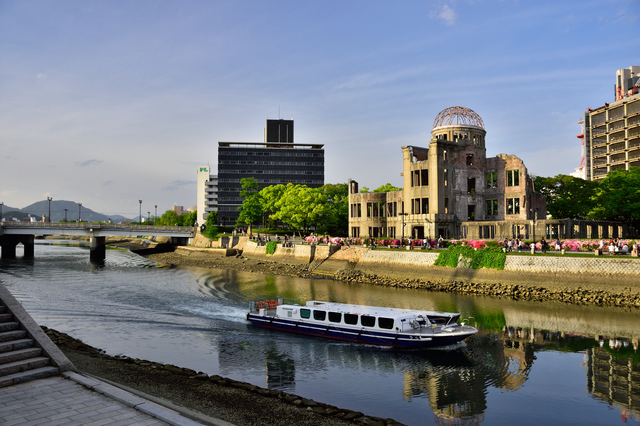 A fulfilling top 30 recommendations around Hiroshima – Specially for your soul and stomachs!

Hiroshima, a beautiful city located on Japan’s Honshu Island itself. Despite its destruction during the WWII, it has risen to become a city which cannot be compared to another. Let your eyes and stomach feast on its mesmerising views, historical architectures, deep rooted cultures and of course their mouth-watering and eye-catching cuisine which will stay engraved in your memories forever! Let’s not wait any longer and allow the pictures and descriptions below to do all the talking! 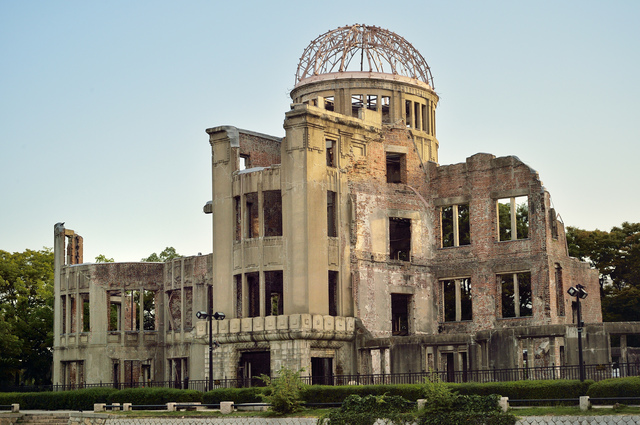 An iconic remains from the WWII. Also known as “Hiroshima Peace Memorial” or “Genbaku Doumu” in Japanese, it was the only building which survived the first atomic bomb explosion. In 1996, it was declared a UNESCO World Heritage Site. It is also part of the beautiful Peace Memorial Park. 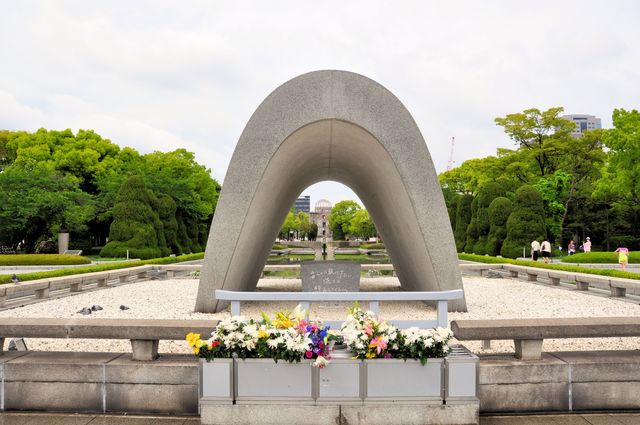 Planned and designed by Japanese Architect, Kenzo Tange, a beautiful park spread on top of the open field which was created by the explosion itself. A reminder of the importance of maintaining peace in our world. Also, in memory of the bomb’s victims and indirect victims. 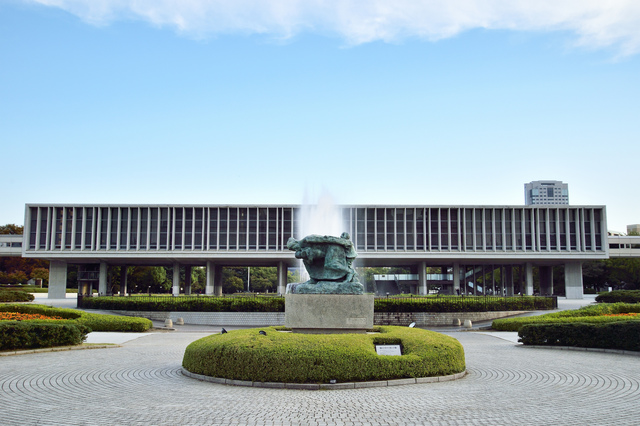 Located in the Peace Memorial Park itself, information about the bomb itself and WWII, together with its effects can all be found here in this very museum. The Memorial Cenotaph, Peace Flame and the Atomic Bomb Dome can be viewed from here too. 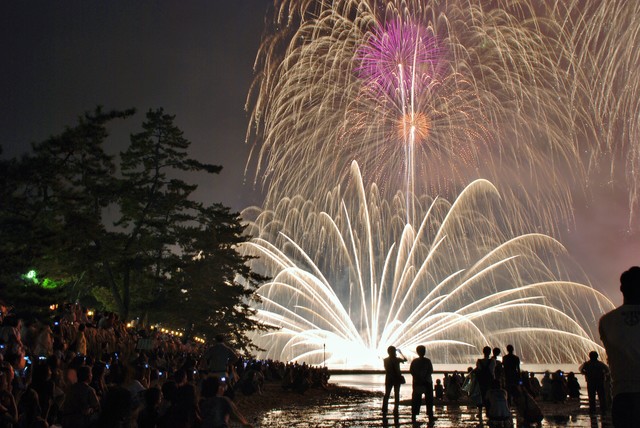 Every year during summer, catch one of the most anticipated fireworks display here in Miyajima! Over 300,000 visitors each year. Photographers come all the way, especially to capture through their viewfinders the beautiful scene of the fireworks together with its spectacular colours and illumination which in turn helps make the silhouette of the O-torii Gate stand out. They follow a theme every year, so there will always be something new to look forward too! 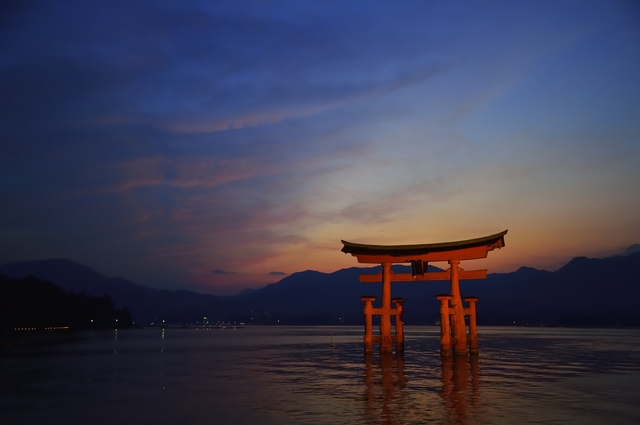 A extremely famous Shinto shrine, especially for its magnificent “floating” O-torii Gate which is accessible during low tide.The shrine complex is listed as a UNESCO World Heritage Site, and the Japanese government has designated several buildings and possessions as National Treasures. 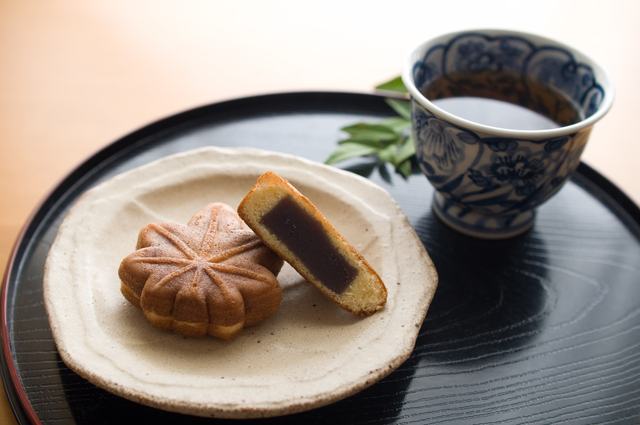 What more than the perfect place to enjoy some of Hiroshima’s famous traditional Japanese sweets. Be sure to catch their “Momiji Special” menu during Autumn! 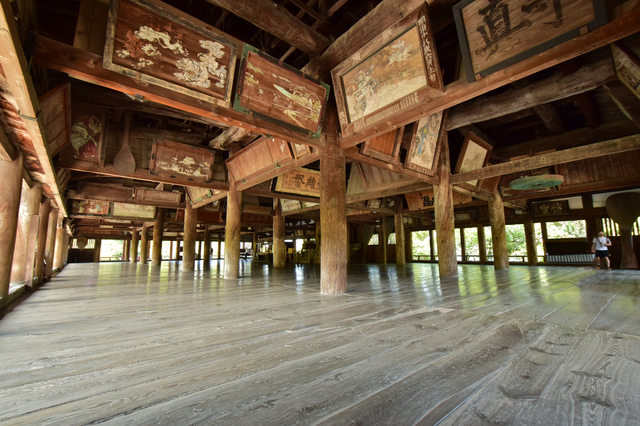 Built in order to commemorate Toyotomi Hideyoshi, who is one of the three unifiers of Japan in the 16th century. Designated as a National Important Cultural Property in 1963. 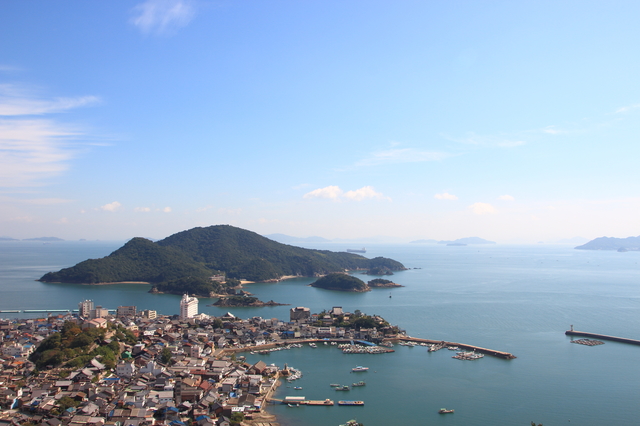 A port town which was very prosperous in the past with many sail boats. It was one of the places to stop, especially merchant ships when wanting to have a little break till the tides settle. This historical port overlooks the Seto Island Sea and it now part of the Setonaikai National Park. Come here and imagine this town bustling with people coming in and out while merchants busily sell their loots! The production of “homeishu”, which was famed to promote longevity, was also produced right here in this very port itself! By the way, did you know that the movies “Ponyo” and “The Wolverine” have some ties to this little port? 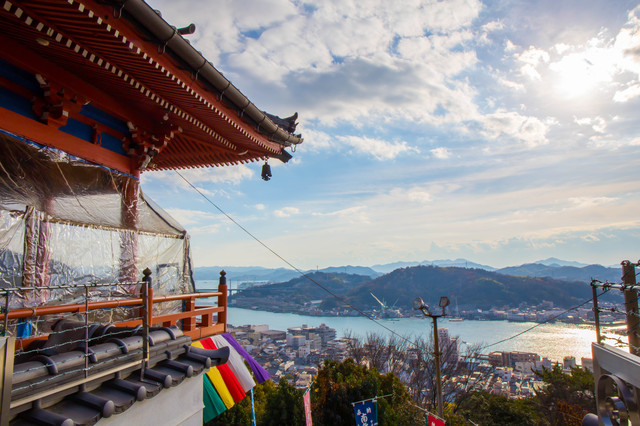 Stopping by Onomichi means stopping by Senko-ji. Founded in the year 806, and situated in Senko-ji Park itself. One of the stops for people who go on pilgrimage. Be sure to check out the Red Hall and the famous bell tower, which is chimed on every New Year’s Eve. 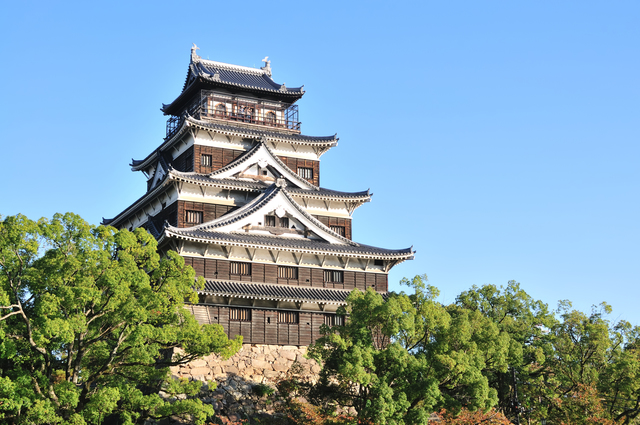 Also known as the “Carp Castle”, it was constructed in the 1590s but was however destroyed by the atomic bombing! It was then reconstructed again in 1958 and houses a museum to showcase Hiroshima’s pre-WWII history. A long time ago, it served as the home of the Hiroshima fief’s feudal lord. 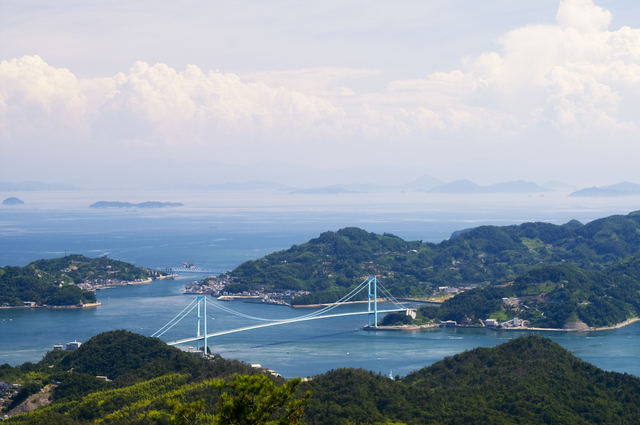 A popular and famous mountain in Hiroshima. Many go there to witness the breath taking sceneries. Every season paints a different picture from the sea of light pink Sakuras to golden red autumn maple leaves! Do remember to catch the sunset! 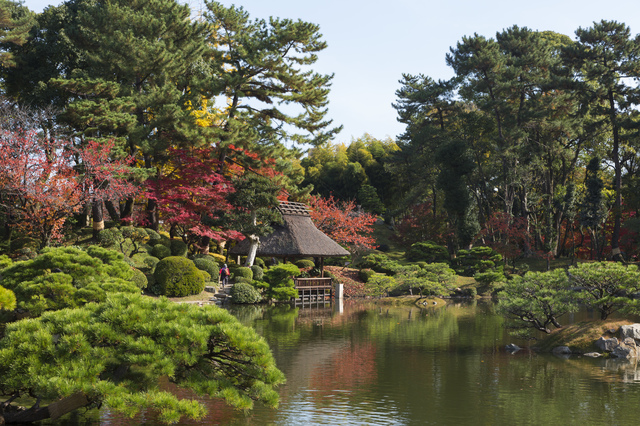 Wanting a garden specially for his villa, this serene garden was created by the ruler of this region, Asano Nagaakira in the year 1620. He used his garden to depict many different scenic views like mountains, valleys and beaches which are represented by the strategically placed bridges and houses.

Get in touch with the Kagura tradition which have been passed down through the ages. An old Shinto theatrical dance dedicated to the guardian God, “Uji-gami”. Hot springs, restaurants and accommodation are available for those whom would like to have more time to appreciate this traditional village. 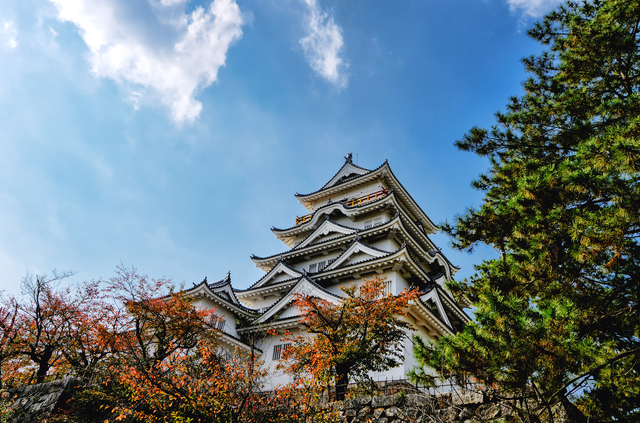 It was the home to Bingo-Fukuyama fief during the Edo Period. It is also known as Hisamatsu Castle. During WWII, some of the buildings of the castle fell victim to the bombing. After that, only the main tower was rebuilt in 1966 and the other buildings was replaced by the Fukuyama Station. 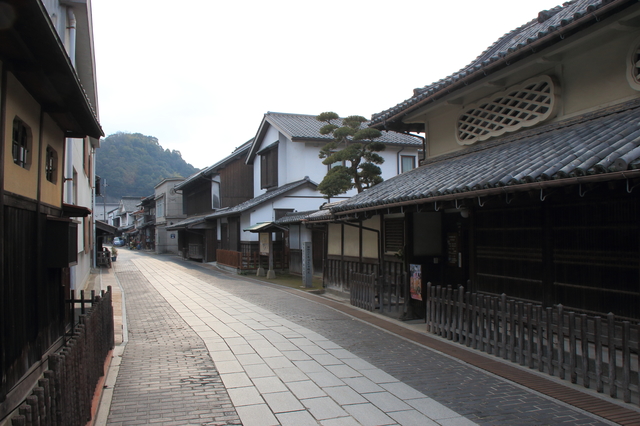 Founded in the year 1958, the city is famous for their bamboo! Recently, the old-style factory buildings area was selected as one of Japan’s “100 Most Scenic Towns”. Let this town bring you back to the old days with its preserved structures, museums and shrines. 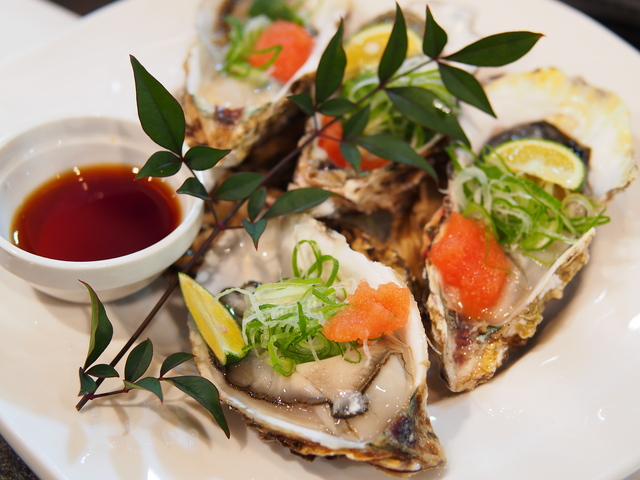 What more than a floating traditional restaurant, with a backing of half a century of history, located near the Atomic Bomb Dome where you can have a taste of fresh, mouth-watering Oysters! If your pockets are able to handle it, do check out their extravagant and stunning course meals which can go up to 11,000 yen per head! Especially the every popular course, “Kakizukushi” where everything is oysters, oysters, oysters! A dining experience which you will never forget. 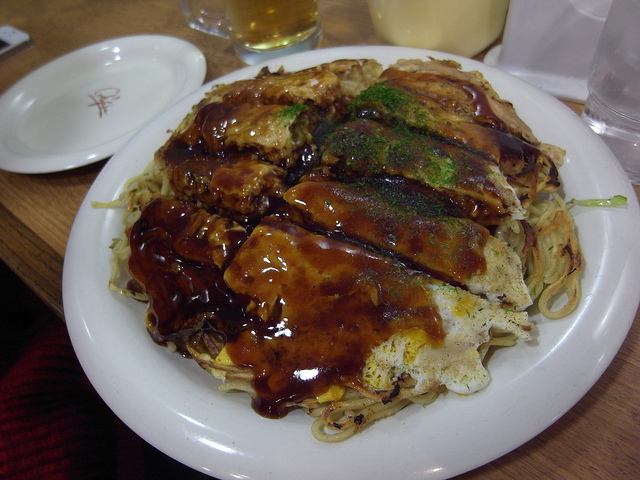 The number one stop in Hiroshima for Hiroshima-yaki. Yes, this is the real deal. With 65 years specialising in making Okonomiyaki which is filled with freshly chopped cabbage, lots of bean sprouts, tasty buckweat noodles and topped with their special sauce. On top of that, did you know that even the griddle which is used to cook the Okonomiyaki in this shop is patented?

Sometimes known as Mitchan’s son, but its history doesn’t prove that as this Okonomiyaki store has 25 years of history. They make delicious Okonomiyaki, even without the need of special or fancy ingredients! Their skills is proven by being published in the “Michelin Guide” and what’s more, it was also awarded the “Bib Gourmand”! They have another brunch inside Hiroshima Station’s Asse Shopping Mall too!

Closing day(s) : Every Tuesday (The next day during public holidays) 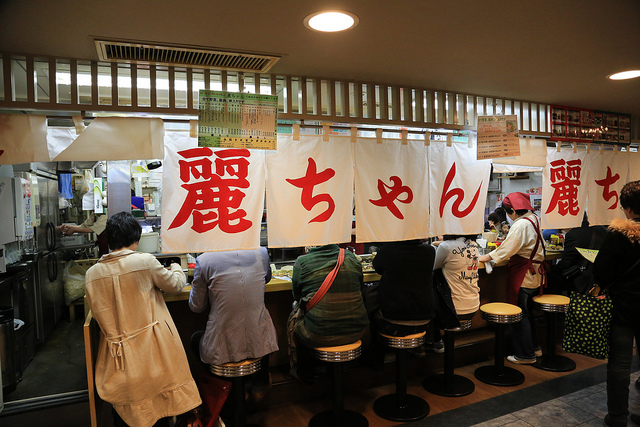 This particular Okonomiyaki store starts way back from 1957. It was just a little stall then, which started right after the war and have been long standing up till today. Now they are situated inside the Asse Shopping Mall at Hiroshima Station, stretched 6 stalls long on the 2nd floor. Be warned as this store always has a long queue of people and it will tempt you with its irresistible fragrance! Rei-chan’s Okonomiyaki mainly focuses on the basic ingredients, ‘vegetables, pork and egg’.

Have you heard about this particular building in Hiroshima where stores and stores of Okonomiyaki are all lined up, right in the centre of Hiroshima? It’s called “Okonomi Village”. So… Which one to pick? Here’s our recommendation for you, “Atomu”! Their most recommended dish would be, of course, none other than the “Atomu-yaki”. With the help of a powerful combination of garlic and Kimchi, be ready for its explosive punch in your mouth! An Okonomiyaki which you do not want to belittle.

21. A popular shop with an unbearable queue [ Anago Rice Ueno] 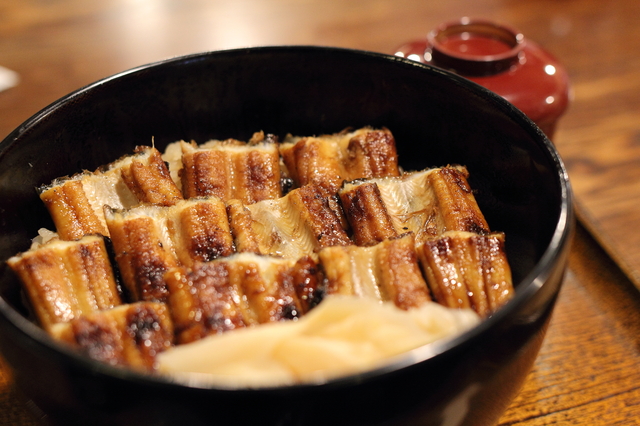 A rice bowl topped with an abundance of Miyajima’s speciality Anago. A intriguing balance between the fluffy Anago and their sweet-spicy sauce. Do be careful as it is a deliciousness which will make you come back for more! There is no return after the first bite. 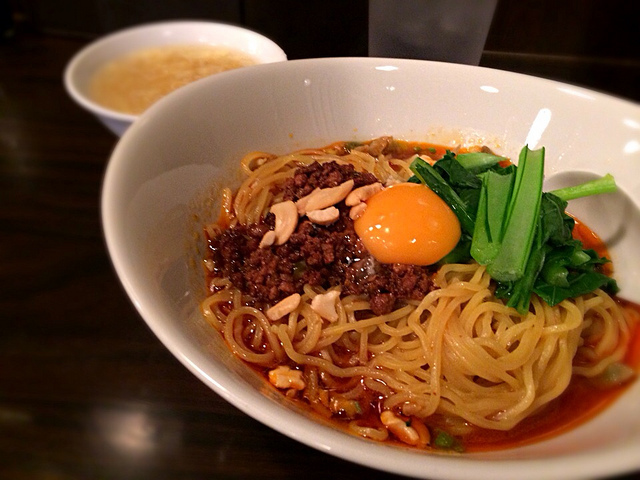 A “Dry Tan-tan Noodle” speciality store which is very well known by the locals of Hiroshima. A popular store which takes utmost importance on its Sichuan ingredients. From the name of the store, their recommended dish is of course, their “Dry Tan-tan Noodle”. A total opposite concept from the usual Tan-tan noodles. Their straight noodles are topped with Japanese peppers which gives a kick in every bite! A flavour which you’ll never be able to get else where.

Only come here if you are looking for ramen, as they do not serve anything else other than “Ramen”. A ramen store which has stayed strong and lasted through over 50 years. Over here, you may customise the amount of noodles and garlic of your own ramen to your preference. While it is a simple ramen, do savour the balance between the soup and the noodles, as well as the richness in the soup itself. How about a taste of the harmonious flavours of Hiroshima’s ramen?

Established since the year 1976, Pizzeria Pasta has been serving tasty Italian food until today. What makes them special is their specificness about their healthy ingredients. The chefs themselves have personally gone through training from the Italian Embassy’s head chef and prides themselves to serve classical pizzas and pastas. Their food are loved by people from all walks and ages. Do try out their “Pizzaneze”, a special pasta which is fried both on the top and bottom! It looks like a pizza but you’ll notice that it is actually pasta, how intriguing! It is fried together with a mix of egg, cheese and their meat sauce.

“Hiroshima Okonomiyaki Story – Ekimae Hiroba”, also known as the Okonomiyaki Theme Park, in here, you can find an interestingly named Okonomiyaki restaurant called “Yakunja”. Over here, you may enjoy one of Hiroshima’s famous local food to your hearts content! That is… “Oyster Special”. The most popular dish where the ingredients are of the freshest! What are you waiting for? Don’t let your taste buds wait any longer!

One of the stops to have a taste of delicious Chinese noodles and Tempura, a restaurant called “Akichan”. It is the place where the locals go to! What’s good here? Well, that is none other than their “Hormone Tempura”, one of Hiroshima’s hidden treasures. Savour every bite into its steaming hot juicy yet tender Hormone Tempura and complement it with a glass of beer, just the way the locals love it. It’s your turn now!

An irresistible blend of taste of fluffy anago covered with crispy spring onions and dried seaweed! You may pick either Eel (Unagi) or Anago for your Hitsumushi but, we highly recommend Hiroshima’s pride, the Anago!

A store where you have so many to choose from! Anything from rice to noodles, you name it. From the selections, we recommend the superb Fried Oyster Set!

Here, you can get fried fish pastes in the form of sticks. Do try out their popular selections, the cheese bacon, squid legs, spring onion & octopus and asparagus & bacon! Fish meat with a bit of elasticity to it and an Umami amount which is just right. It may be a little hot but the taste just makes you keep eating!

If you are the tough type, we recommend the “Meat Egg Rice” which you can find in restaurant called “Popeye” in Kure City. What exactly is “Meat Egg Rice”? It is a rice bowl where pork belly meat which is grilled on the griddle is placed on top of the rice itself. The rice itself too is topped with furikake (seasoning) and as you can see from the picture above, they do not hold back on the amount of mayonnaise and sauce! A dish which is close to home for the people from Kure city. With just 500yen, you can enjoy this amazing dish! However, be warned as the shop closes every weekend and during public holidays!