> Travel > Full of Trick!? 6 Secrets of Himeji Castle’s Strength that How It survived in The Age of Wars 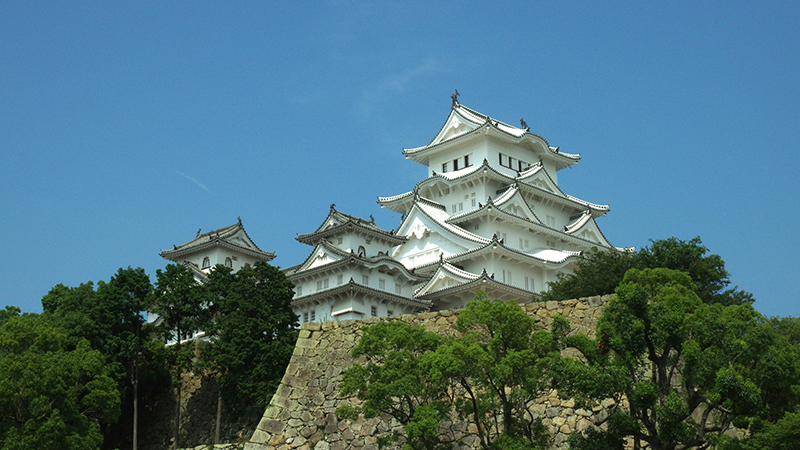 Full of Trick!? 6 Secrets of Himeji Castle’s Strength that How It survived in The Age of Wars

Castles have their roots deep within the culture of a country, and are an irresistible sightseeing spot. They are where the people built the nation lived and where events that shaped the nation occurred. Historically, castles are the ultimate symbol of power, requiring great feats of engineering and design to create. They continue to be places where history and culture are distilled into stone and mortar. This time, we would like to introduce you to Himeji Castle. Among the many beautiful castles of Japan, Himeji Castle stands out as one of the finest.

The first thing you will notice about Himeji is its unique and beautiful white outer wall. The large wide walls spread around the castle like the wings of a heron, giving it the nickname, the “White Heron Castle”. Its magnificent appearance ranks it on par with Germany’s Neuschwanstein Castle. Not only is it one of Japan’s national treasures, it has been designated as a special historical landmark and an Important Cultural Property by the Japanese government. It has also been registered as Japan’s first UNESCO World Heritage Site. Even before well-known sites like Mt Fuji and Kyoto, Himeji Castle was the first place in Japan to be internationally recognized for its cultural importance, and as such cannot be missed.

Himeji Castle was originally built in 1333 as a defensive structure fortress. In 1346 it was rebuilt as a castle. Its location, just west of Kyoto, which was the center of Japan at that time, made it vital for travel and communication with the western half of the country. Since that time it was considered a vital castle by the leaders of the country.

The castle gained the name “Himeji” during Japan’s Warring States Period from one of the three great unifiers of Japan, Toyotomi Hideyoshi, who had the castle expanded. In 1581 the three storied castle keep was completed, becoming one of the biggest castles ever built. Later, in 1600, Ikeda Terumasa, called the “Shogun of Western Japan”, became the new lord of Himeji. He greatly expanded the castle in order to keep a sharp eye on the military commanders of the west. The expansions started in 1601 and took 9 years to complete. This is the version of Himeji Castle that we see today. 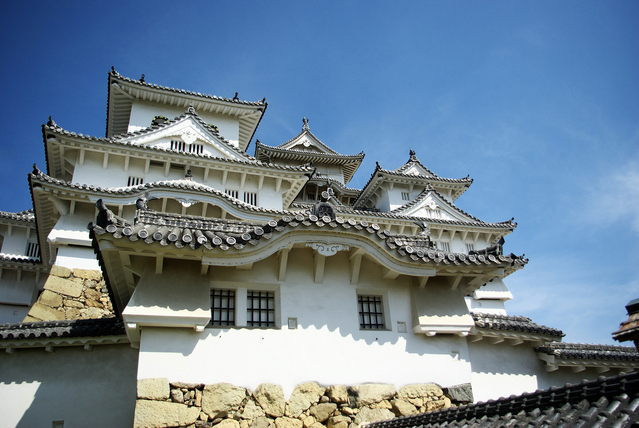 In the 400 years since… The castle has undergone major repairs 4 times. However the castle keep remains largely untouched. In all of Japan there are only 12 castles of that architectural style left, and only four of those have been designated as national treasures. Himeji Castle allows visitors to envision the culture of Japan, from 400 years ago, untouched.

If you have the chance, Himeji is a must see site.

It reflects the cultural heritage of a time of war, but was built by a military commander to bring peace. Its formidable architecture was created to intimidate any who would attack its walls. Time has passed and other wars have come and gone, but Himeji Castle has remained the same. While originally built for war, it has never been attacked and so has become a symbol of peace. Called the “Undefeated, Unburned Castle”, you can truly feel Japan’s yearning for peace in its walls.

The grounds of Himeji Castle are vast, so please allow a minimum of 3 hours to see everything. We suggest researching what parts of the castle you would like to see ahead of time to avoid any confusion.

Before entering the grounds please take a moment to enjoy the beauty of the Japanese castle. Himeji Castle’s gorgeous walls shine in the sunlight. Himeji’s plaster walls have been coated in a white, non-flammable material to prevent fire damage. While this coating prevents fires, it also gives Himeji it’s beautiful, glittering white walls the dignity of a seat of power. From a time of war to a time of peace, these beautiful walls have witnessed it all. 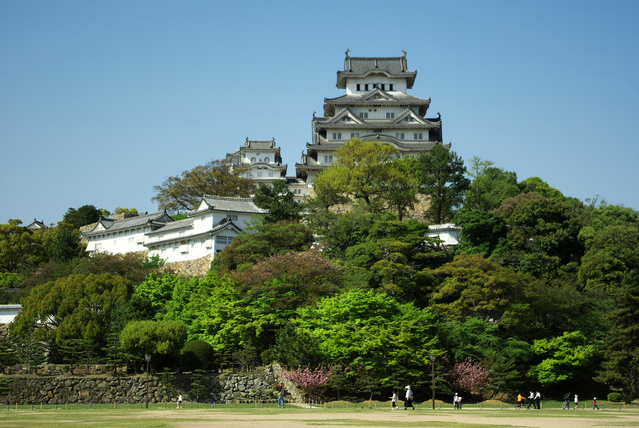 Castles in Japan are composed of three parts. The Outer Castle (San no Maru) is currently a public park. Because the castle keep is built on a hill, it was slightly inconvenient for everyday living, so during the peaceful Edo period the lord of the castle set up an official residence here. The Outer Castle Park also contains the Princess Sen Peony Garden where every May approximately 2,000 peonies bloom. It is not to be missed. 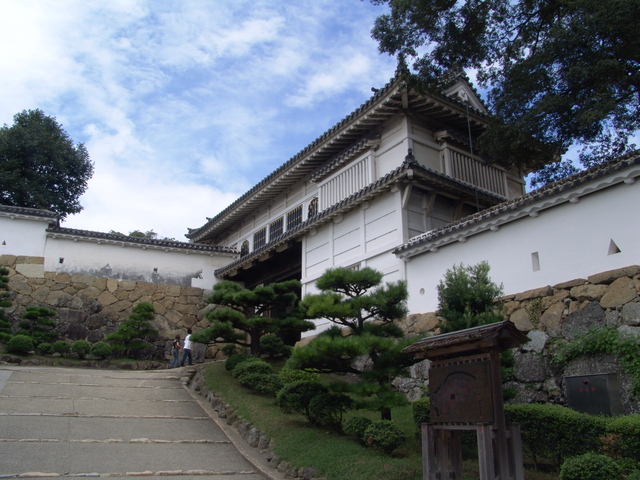 From here we enter the castle proper. The Hishi Gate (Hishi no Mon), is the largest gate in the castle.  It’s the best-preserved gate in the architectural style of the early 17th century and is itself considered an Important Cultural Property. After passing through the gate there are two possible routes to take. If you are short on time, please proceed directly to the I Gate (I no Mon).  If you have time we suggest you head left to the western part of the castle to view the Western Compound (Nishi no Maru). 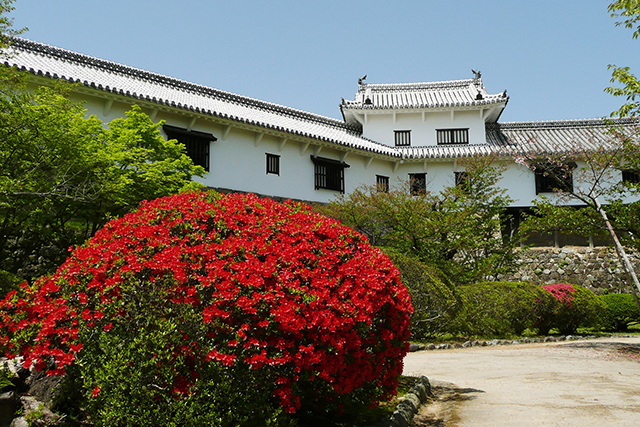 The Western Compound was built in the Edo Period (1603-1868) by the lord of the castle to give his wife a peaceful place to live. In comparison to other parts of the castle you can really feel how calm and relaxing this area is. The wall around the Western Compound includes a watchtower used for repelling enemy attacks. There is a special corridor (Nagatsubone) that is very interesting to visit – not only does it function as a hallway but also as a defensive structure. On the route you can also see the Powder Room (Keshou Yagura) which was built by the princess as a place to rest. It has been returned to its original state with mannequins to exhibit how people of the time lived.

If you don’t have time to see the Western Compound, please proceed directly to the castle keep. From the Hishi Gate (Hishi no Mon) please continue straight through the I Gate (I no Mon) to the Ha Gate (Ha no Mon). This is the shortcut to the castle keep. The gates of the keep are splendid examples of castle architecture. Notice how the road rises steeply and twists around the wall of the keep. To reach the keep, enemies would have been forced to climb the road as it spirals around the keep. The gates of the castle may seem small in comparison to the castle, but they are well built for defense. For defensive purposes, the road to the castle is long and hard to navigate, theoretically making it difficult for enemies to attack. On top of the gates there are watch towers which also function as castle defenses. Samurai on guard can look down on those approaching the castle and defend the castle from above. So you can see, not only is Himeji Castle a work of art, its beauty also lies in the strength and ingenuity of its defenses. 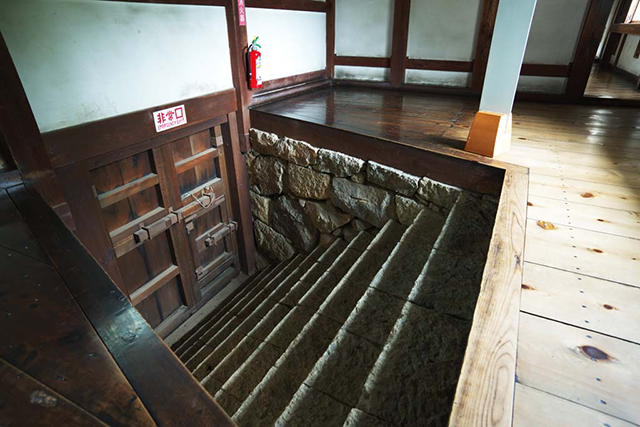 When you look at the castle from afar, the castle is overwhelmingly beautiful. The three parts of the castle together are a true national treasure. It is very rare for a castle to remain unchanged from 400 years ago but Himeji Castle has changed very little from the 17th century. However, if you are looking for a castle like those in Europe you might be a little disappointed. Himeji Castle contains no priceless paintings or other types of art to show. Why is that? Castles in Japan were thought of as purely defensive structures at the time. Think of the castle like a samurai stationed there would. In the attic of the keep there is a hidden room where samurai could conceal themselves as bodyguards. On the pillars and beams of the castle there are small spikes (Hashirama no Yokogi) driven into the wood. This allowed them to be used as weapons if needed. Every window is positioned to look out on the approaches. Attacking samurai would be quickly sighted and easily targeted. On the top floor there is a Shinto shrine. People would pray that the castle would never fall. So we can see that though the outside of the castle is gorgeous the inside of the castle is a purely defensive structure. 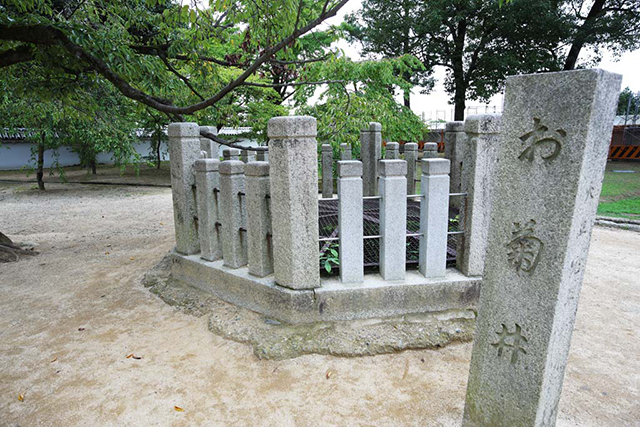 After viewing the Castle Keep, please take a detour on the way to the Hishi Gate (Hishi no Mon) to the Chrysanthemum Well (Okiku Ido). In the 17th century it was a source of water for the castle, but it is also the scene of a terrible ghost story. One of the 3 most famous ghost stories in Japan, “The Blood Mansion”. Many Japanese people visit to peer into the well’s depths. If you are interested, please research the story.

As we have learned, not only is Himeji a beautiful castle, it is a strong defensive structure. But in 400 years, it was never used in war. After building the castle in its current form, Ikeda Terumasa said, “May this castle announce to the world a new era of peace by means of a beautiful government”. The “Undefeated, Unburned Castle” is the embodiment of his words. Please keep his sentiment in your heart when you visit Himeji Castle.

3. How to get to Himeji Castle

It is a 20 minute walk to the castle from either the JR Himeji Station or Sanyo-Himeji Station. It is easy to see the castle from the station and there are guides to give you information, so it’s very hard to get lost. If you have the time and feel up to it we highly recommend walking to the castle. There is place to rent bicycles at the station, but they run out quickly so if you want to rent a bicycle please make sure to get there early. At JR Himeji Station there is an Information desk for visitors. If you want to get to Himeji Castle quickly, there is a bus stop in front of the train stations. Please get off at “Himejijou Otenmonmae” (姫路城大手門前).

If you have a Japan Rail Pass it is very easy and affordable to get to Himeji Castle. From JR Tokyo Station on the Tokaido-Sanyo Hikari Shinkansen, it is a 4 hour trip to Himeji Station. Please be aware that you cannot use the rail pass on the Nozomi and Mizuho Shinkansen so please be sure to ride the Hikari or Kodama Shinkansen trains.

You can use the Japan Rail Pass from Kyoto Station as well. From JR Kyoto Station on the Tokaido-Sanyo Hikari Shinkansen, it is a 1 hour trip to Himeji Station.