> Culture, World Heritage Sites Japan > Kyoto in decline … To the reconstruction of Heian Shrine And involuntary tears of passion

When you visit Kyoto you will find many shrines and temples that were built a very long time ago. Heian Shrine (Heian Jingu) is a famous exception to this and was built much more recently, dating back just over a hundred years to 1895. This remarkable shrine has a rather different history.

In 1868 the capital of Japan was once again transferred. Longstanding administration was already in place in Edo and subsequently Tokyo became the capital city.

As a result, Kyoto suffered much decline in the latter part of the 19th century. As the population decreased the city lost its soul and the future looked bleak.

2. Beginnings of the Heian Shrine

The shrine was constructed to mark the 1100th anniversary of the capital city of Japan being transferred to Kyoto. It was subsequently dedicated to the spirits of the first and last emperors reigning Kyoto, Emperor Kammu (737-806) and Emperor Komei (1831-1867).

Heian Shrine takes its name from its location. Heian is the former name of Kyoto. Actually it was named ‘Heian-kyo’ meaning ‘the capital of eternal peace’.

In such a time of decline it was important to the people of Kyoto to revitalize the city, and Heain Shrine is a symbol of that effort to rebuild.

Originally a reproduction of the Heian Palace was planned for 1895 but enough land couldn’t be bought on the original site and saw a smaller version built on land in Okazaki.

Later that year the International exposition fair was held in Kyoto – exhibiting the development of Japanese and foreign cultures. The main attraction was the replica Heian Palace.

4. The Heian Shrine as we know it

The replica was kept after the expo ended, as a memorial shrine for Japan’s 50th Emperor, Emperor Kanmu, and later for Emperor Komei, too.

Still Kyoto was depressed after the capital was moved to Tokyo. It was following WWII that the people of Kyoto came together to build a new city. They wanted to maintain the good things of the old city, and also create a symbol of new life, industry, education and culture. This symbol was built in the form of Heian Shrine. 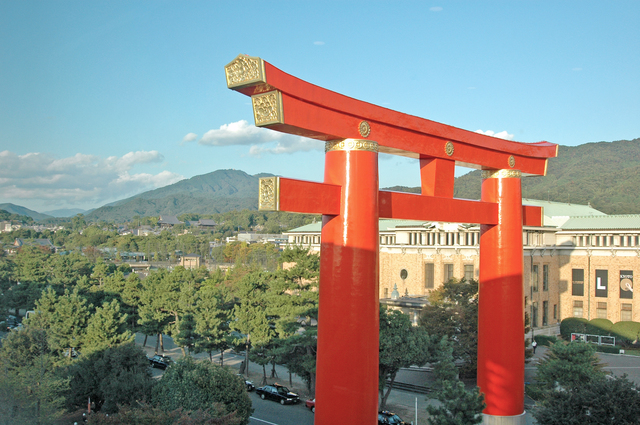 Heian Shrine has a giant vermillion torii gate standing at 24.4 meters. This marks the approach to the shrine and there are a couple of museums near it. However, it wasn’t until 1928 that Heain Shrine had a torii. People wanted a huge gate to be constructed, and it was completed within a few months of construction starting. It was painted with red clay the following year, and given the size of the torii, it was incredibly fast work. 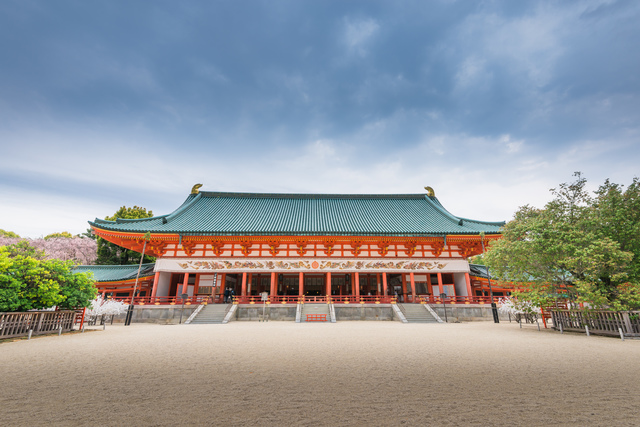 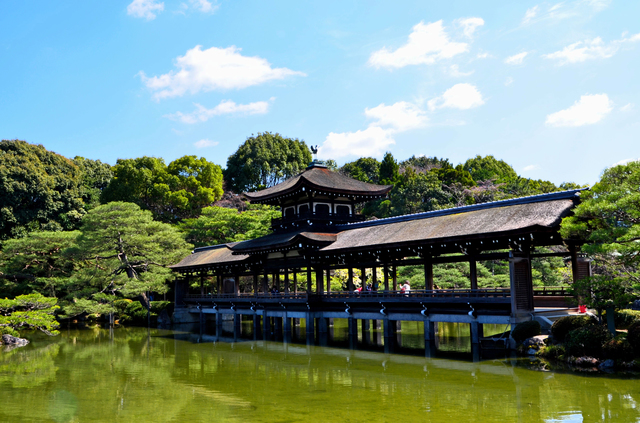 The Daigokuden, meaning ‘Great Hall of State’ is composed of three buildings and is the most sacred part of the shrine. Visitors can enter the first building and offer coins in prayer to the deity. On special occasions some people will be allowed to enter the second building, but nobody outside of the shrine ever enters the third building.

Otenmon, ‘The Main Gate’ is a beautiful construction full of color, reproduced from the imperial palace. Behind the main buildings lie the vast gardens which feature many weeping cherry trees, making this one of the top cherry blossom viewing destinations in Kyoto.