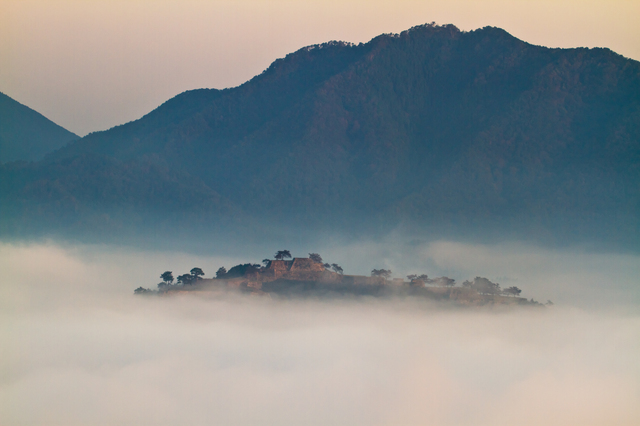 One of the most beautiful and mysterious views you could ever have in Japan. Let us find out why it was built and when the great views can be seen!

Located in Hyogo Prefecture, in the Wadayamacho district of Asago, ruins of Takeda Castle is one of the National Historic Sites in Japan that attracts hundreds and thousands of tourists each year. The spectacular landmark was built on a mountain summit at 354 meters of altitude, earning it the name of ‘Heavenly Castle’ or ‘Castle in the Sky’. Construction of the castle began in 1441, ordered by Lord Sozen Yamana in order to protect the Tajima region from aggressions of enemy regions. After the Battle of Sekigahara in the year 1600, Takeda Castle became an abandoned site following the death of its final lord, Hirohide Akamatsu.

The castle area measures 100m east to west and 400m north to south, with a layout divided into four parts: the North part (Kita Senjo), the South part (Minami Senjo), the West part (Hanayashiki), and the Center where the highest spot (Tenshudai) is situated, at 353.7 meters. International tourists often referred to Takeda Castle as Japan’s Machu Picchu, due to its resemblance to the majestic mountain ruins of Peru.

Perhaps what makes Takeda Castle a must-visit in Hyogo is the surreal breathtaking view it presents on autumn mornings, when a thick mist hangs surrounds the ruins. Spectators witnessing the phenomenon are sure to be left in awe at the magnificent sight of a mythical castle floating in the sky.

2. When Can “The Heavenly Castle” be seen? 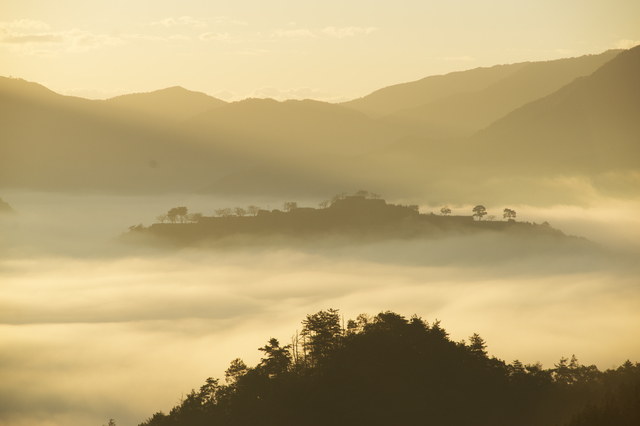 Early in the morning between sunrise and 8AM, during autumn (September to November), the thick fog from the Maruyama river below Takeda Castle would rise into the air at the middle level of the mountain. This phenomenon forms the sea of clouds surrounding the castle ruins, creating an unforgettable sight that no visitor to Hyogo should ever miss.

The best time to witness the famed Heavenly Castle view is when weather conditions are favorable, where there is a rise in humidity, the wind is low and the sky is clear. Normally, the sea of clouds will linger on until 8AM, although timing may vary a little bit, depending on the weather for the morning. Be sure to have your camera ready, because the scenery gets even more beautiful when the first light of dawn appears and reflects off the clouds.

3. The best spots for a superb view of Takeda Castle 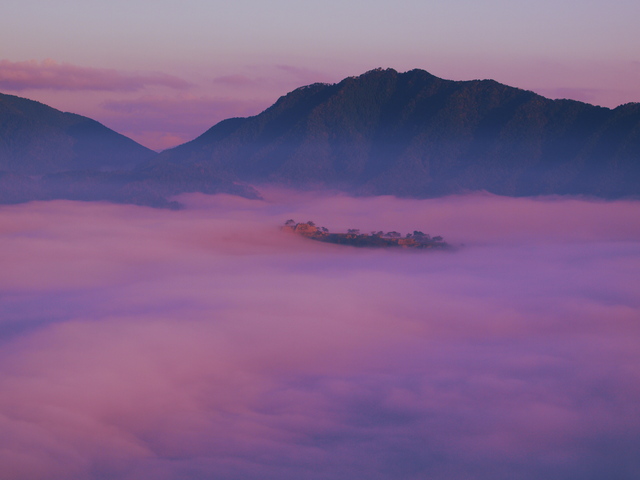 There are two spots from which to get a scenic view of Takeda Castle ruins. For a panoramic view of the whole vista, take a hike up the nearby Asago Mountain. Make the trip early in the morning, before sunrise, if you want to catch castle surrounded by fog. 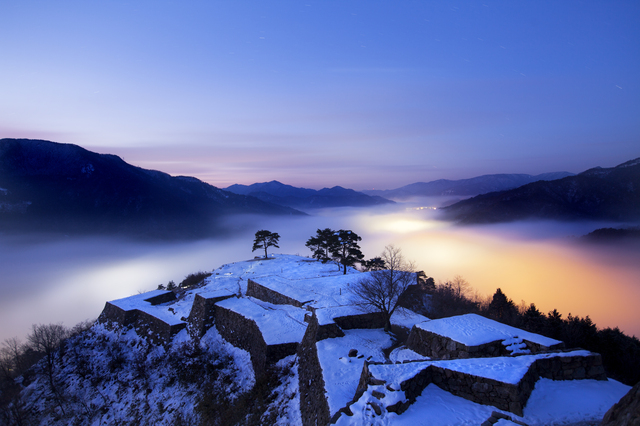 The second place to view the ruins is to ascend all the way to the site of the ruins itself. Some of the best spots for an amazing view of the castle in the clouds are the front of the ruins (Ritsuunkyo) and the Fujiwa Pass on the west side.

After hiking up and down the steep hills to Takeda Castle, the ideal place to take a break, shop and have lunch is Toyooka City (Chuou-cho), around Caban Street (Handbag Street). This is a place known for its one-of-a-kind locally made high-quality leather bags and accessories. There are even vending machines selling bags! Given that Toyooka is a rainy region, don’t be surprised to see umbrellas being sold everywhere, as a locals has a saying that goes, “forget your lunch, but never your umbrella.” 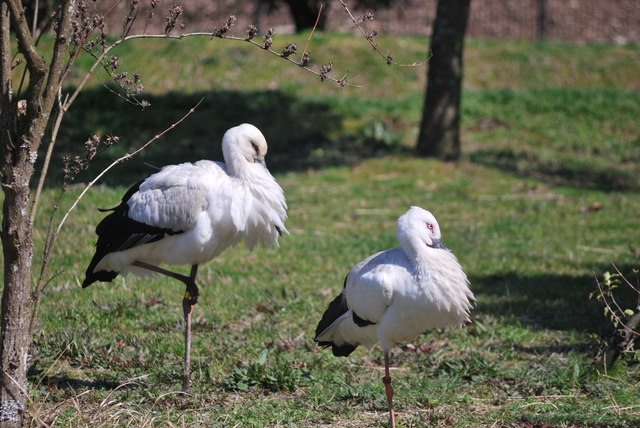 You can get up close to the beautiful oriental white stork in the park dedicated to the preservation and protection of these gentle and beautiful birds, here in Hyogo. The storks at the park already have their wings clipped, so they are protected from predators within the park. There is cultural center nearby, where visitors can learn about the history of how the bird species is being saved from extinction. There is also a donation box where you can contribute to the preservation efforts, in exchange for a stork origami kit. 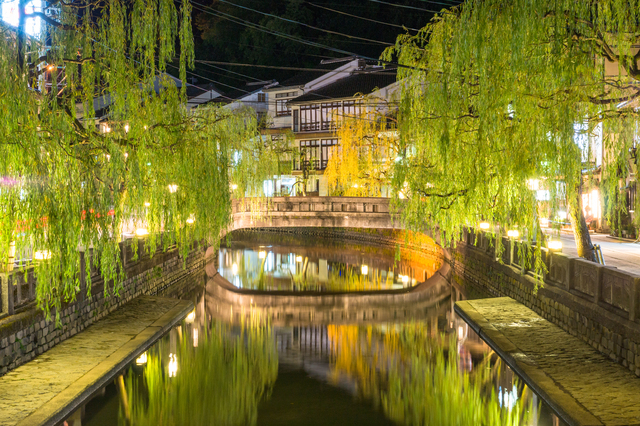 What can be more rejuvenating to the body after a day of hiking up and down the hill than a bath at Kinosaki Onsen? You can find various exotic public baths to indulge your sense at the hot spring town. There is the Sato no Yu, a scenic spacious bath with clear water surrounded by waterfalls. For a truly unique experience, there is the open-air Mandara-Yu bath which features a cypress bathtub, the Ichino-Yu that has been popular since the Edo era, and the Kono-Yu, the oldest bath in town. There is a cave bath called Jizo-Yu, and the Goshono-Yu said to be good for one’s skin.

If you would like to check the locations and more details, visit  at http://www.kinosaki-spa.gr.jp/global/hotspring/hotspring.html

5. How to get to Takeda Castle

There are several ways to reach Takeda Castle by train:

Once there, you can reach the castle ruins after a brisk 40-minute hike to the top of the mountain via a mountain trail. Be sure you wear appropriate shoes for hiking!

Fees: 300 yen (Free of charge for Junior high school students and below)